Eden Roc (The Line Up)

Eden Roc were formed in Jan69, Gaz was playing in a soul band with a singer called Ian Bell, the rest of the band were students who were finding it very difficult to study and play in the band.

When they decided to part company with Gaz and Ian, Gaz set about getting the ex Zany Woodruff pair Pete Sewell and Kenny Rooke (The Gnome) to form a new band.
John (Wints) Wintony was added on keyboards and we then had the rhythm section.
We then looked around for a brass section. John Jagger from Skin Deep was added and finally Alan Rogers (aka ‘MacThrirt’ ) came in on tenor sax.

Our front man and lead singer was a guy called Ian Bell, Ian was a excellent showman and a very good singer who could carry a show on his own.
That was then the line up of Ian J Bell and the Eden Roc. One time we did a week in Bournemouth for 100 pounds, a lot of money in those days. We set off two days before we were due to start the gig and broke down in Banbury Cross (Yes the – she rode a white horse, Lady Godiva town) and one of the first persons we saw was one of  the Cleckheaton girls, she begged us not tell anyone down there that we knew her, she had apparently just met this guy and was visiting his home for the first time (the girl had ginger hair i can’t remember her name but she was best friends with a girl we called the beauty queen who used to come round with the band).

Anyway, our roadie “Taffy” forgot to check the oil before we set off and the engine seized on the way down. We had to have a new one, which cost 95 pounds. Therefore, simple maths would suggest that the five pounds we had coming would not support, for one week, seven band members, two roadies and three friends, food and drink for all, in a transit van using copious amounts of gas.
I sent home a postcard asking my mum for money, as did everyone else to their families, to be sent to the club. My excuse was that someone had stolen my shoes. I still have the postcard.

Three days later, the band received some replies. Some of the mail contained money, like mine (5 pounds), and some with no money and comments such as “a bit of bad luck you’re having then, still it all toughens the spirit-have fun?”. We managed somehow, I don’t know how. I lived on cottage cheese, tomatoes and French bread (this was on the advice of Mac the sax player, who was used to living frugally). I seem to remember we spent the week on some campsite, but it can’t have been very pleasant, because it has been erased from my memory.

We played at this club on the seafront in Bournemouth for the week called the Ritz Ballroom, and drank at a pub located at the top of the hill, straight up from the club, after you negotiated the roundabout at the seashore road.  Anyway the club DJ thought he could drink. He didn’t know that in Yorkshire we suckled from our mothers on mild or bitter, one teat for each. He had Monday to practice and then Tuesday lunch came around. It didn’t take him long to get absolutely blathered and he could hardly sit never mind stand. Anyway, part of his job was to ride around Bournemouth on this three wheeled contraption used previously as an ice cream cart, with a large box at the front. On the box, were posters advertising who was appearing during the coming week at the Ritz Ballroom. Well, he set off from the pub, down the hill. Incidentally, the bike was fixed wheel bike, with no gears and no brakes. To brake, you had to back pedal. It was designed for a sedate amble round town at 1 mile an hour, with frequent stops to sell ice cream. He set off amazingly well and we were impressed at his foot control on the pedals. After about 20 feet down the hill, he made the mistake of looking back in order to smirk at us, and lost his footing on the pedals. The rotational speed of the pedals were a just a blur as the speed of the “vehicle” increased at an exponential rate. He couldn’t get his feet back on the pedals and sped at a frantic pace down the hill, towards the roundabout, the promenade, and the eventual plunge over the sea wall into the sea. All of this he accomplished in record time. If there was a prize for this type of speed trial, he would have won it. He appeared that night with a black eye and a sprained wrist, but little else in the way of damage. Nothing needed to be said about the relationship between his capacity for drink and the ability for rational thinking, and one other amazing point was that around two weeks later he turned up at the Garside Guest house, he said that after the band had left it was really boring and no fun, so we made some sort of impression in Bournemouth. It wasn’t the last time we broke down, but it was certainly the funniest week of my early experiences.

Also on the bill that week, were “Emperor Rosko” a BBC Radio DJ and Freddie King, who was just a phenomenal guitar player from the States. He played a Gibson 345 stereo with strings like the wire ropes used to tie up oil tankers when docked. Freddie was quite the Blues phenomenon you would expect, coming from the Mississippi Delta. He was a great influence on many of the more famous guitarists to come on later, like Jeff Beck and Eric Clapton, who were heavily influenced by him.

Needless to say, the week was an experience and we survived it. Taffy was the villain of the week. I think Pete and Slim threw him over a hedge. That was the usual punishment for anyone who made mistakes, and also for the first one to see Blackpool Tower, on the way to a gig.

I have quite a few memories of the week spent in Bournemouth, the first one is of the coffee bar we used to frequent, it was called The Vulcans Harth, Slim renamed it The Vulture’s Arse , I too remember Emperor Rosco but mostly for the go go dancers he had with him, they were dressed as red Indian squaws, really sexy for those days, one was blonde the other brunette, for me they were far more exciting than Freddie King. I also remember a afternoon spent in Poole, we found a backstreet pub with a huge black barman who joined use for a afternoon session which was a big mistake, the partaking of the local cider was a mind blowing experience, unfortunately we ended up p**sed and what was worse was the bar guy wanted to fight either Slim or  Gaz for some strange reason. In our haste to get away Slim fell into sea, so he has told me, but I can’t remember due to the drink, I don’t know how we managed to play that night. Because we had very little money we had to sleep in the van, that is until we encountered two young ladies from Swindon who very kindly offered two of us accommodation in a caravan they were staying in for the week, well that’s a story we should not go too far into, but some of us were well looked after so to speak, we had to make sure the Texas Ranger (the night watchman) as Slim termed him did not catch us entering or leaving the caravan site. I seem to remember Wints trying to break into a dalek (that’s what we called the changing cubicles on the sea front) to sleep in one night, he must have been desperate.

My last memory of that week was whilst driving on Salisbury plain at around five in the morning on our way home, i could see Stonehenge, the sun was rising and there was still mist around ,what a magical place it looked, you could imagine the druids dancing around the stones, i remember at around this time i put the radio on, the words rang, Call out the Instigator because there’s  Something in the Air, oh yes , Thunderclap Newman, number one that week in 69, and it sure felt like there was something in the air.

Needless to say all minds were a trifle muffled in that famous week, I dont think the vegetables of Bournmouth have witnessed anything like it before or even after!

I seem to remember receiving a token gift from 327, Cliffe Lane, of £10. I also recall that due to my dear partner in crime SLIM the said amount that was to last the rest of the week was history after one evening and the lunchtime session the next day. That was the day we spent in the boozer with the rather large dark person. We must have been well oiled as I can’t remember Slim and I not taking up the challenge of some local I am tough person trying to be cute with “the boys”.
Re. the ice cream tricycle , I recall sitting the tossa taffy on the front box and Sewell held him while Slim launched the pair of them down the hill towards the roundabout, hence the afore-mentioned crash. Shame old taffy didnt come off worst as he deserved it!  I think Wints had had a half and pissed himself on the same occassion, having to throw his shreddies in the nearest recepticle, not a pleasant occasion for the local crumblies.
As for the young ladies with the caravan I think the least said the better.  The old b**tard who looked after the site didn’t get a wink of sleep – serves him glad.

I just thought I may add that there has been no mention of any music played by our travelling band of players. Did we ever get to play anything that week?, I certainly can’t remember. I recall Rosco and his musical radio ariel and some other disc jockey crawling up his arse, oh and some tasty black blues guitarist. (it wasnt him from the boozer was it?) Oh and the Gnome getting all gooie-eyed when we passed Stonehenge. Its still there Kenny if you want to reminisce.
Ah here is a quick recall – Freddy Kings backing band were called Killing Floor, reminds me of a certain caravan !!!!!!!!!!!!!!!!!!!!!! 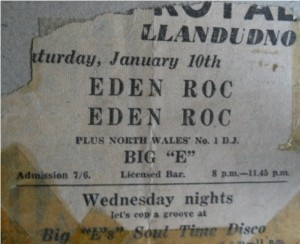 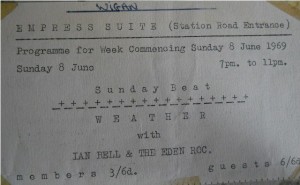 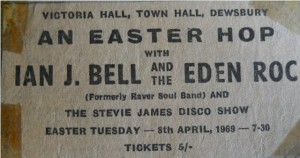 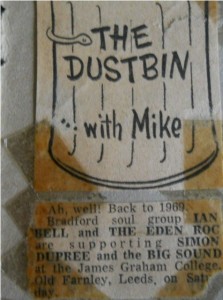 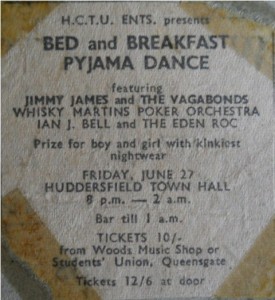 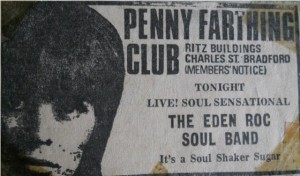