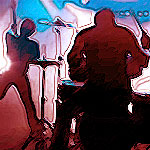 Around 1966-67 there were quite a few bands which we considered to be our rivals, the biggest I think we’re a band called The Outer Limits. They were an excellent band playing the same type of material as ourselves, I think they came from the  Pudsey, Leeds Bramley area, this band was fronted by Jeff Christie who later formed the band Christie who had worldwide success, Jeffs drummer was Paul Fenton, a Dewsbury born boy who had played locally with The Peppers, a Dewsbury group which included the late but great Teddy Platt, After Christie Paul played with Mark Bolan and TRex.
Another band around at the same time was Nelson Fletcher and Ellisons Hogline, they too were very good and they also played the soul stuff, the other two bands who we played regularly with at gigs were The Midnight Train with the excellent Grom Kelly on vocals and Root and Jenny Jackson and The Hightimers from Huddersfield.
On the scene at this time were a few groups like Mama’s Little Children, Mouldy Warp, The Sleepy Wakes. I think all three came from the Leeds area, and last but not least  The Elizabethans, who in the 70s became Kindness and then Smokie, but at this time they were not working at the same level of gigs as we were and therefore were not considered rivals, however in the middle 70s and onwards they had a lot of success worldwide, they were from Bradford and really nice lads.

Nationally we were working on the same circuit as The Amen Corner and The Equals to name but two, which gives some indication at what level the band was being promoted.