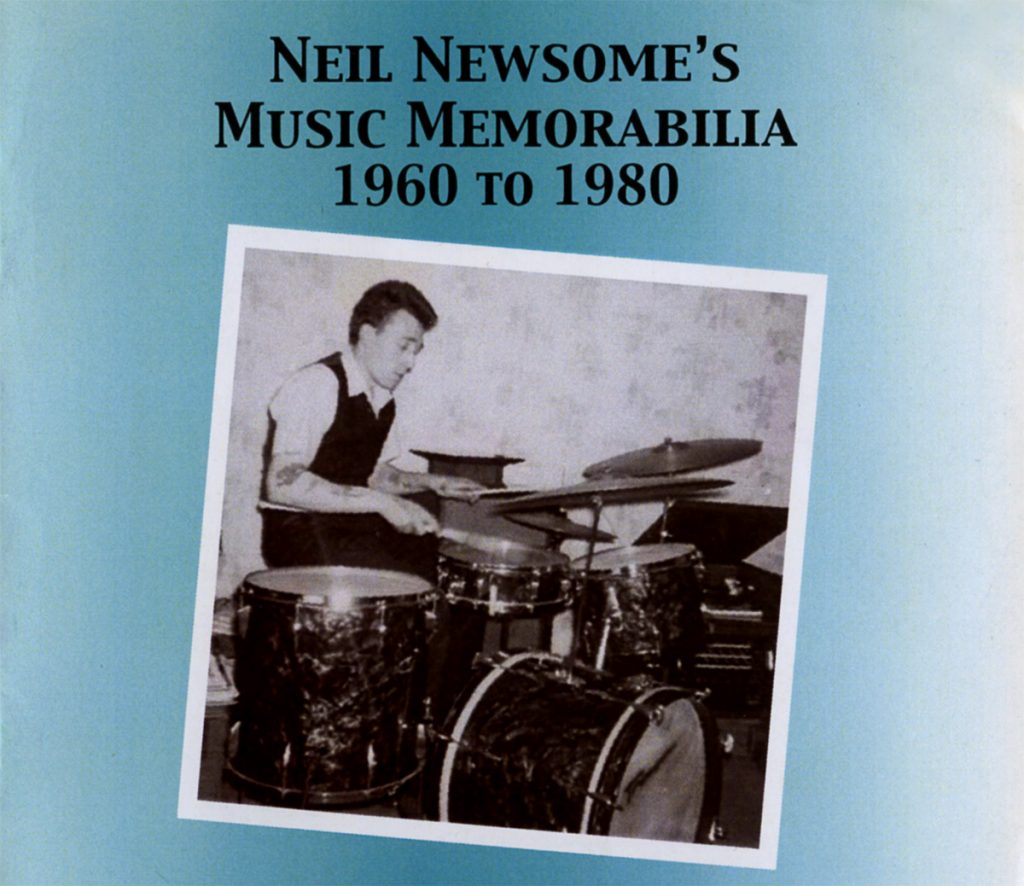 The dvd of all my autographed photographs was originally compiled for my family, but as I later learned it could be of interest to the membership of the Joe Meek Society. I spoke to Mark Newson after sending him a copy and he asked if I considered offering it to members so I suggested a figure of £5.00 each of which I would donate a £1.00 back to the JMS.

The dvd consists of 107 pictures each displayed with a number at the bottom which then fades out. The booklet contains information relating to all the pictures although most are obvious some are more obscure hence the number reference.

I enjoyed my time with the various bands which was between 1960 and 1980. My first band was called Whirlwinds later the Atlantics, our singer was Ray Walsh later changed to Jamie Lee by our record producer Joe Meek with whom we recorded In The Night and Little Girl in Blue. the band lasted three years and folded in 1963 after we had been in France playing for the American Base of NATO at Camp de Loge in Poise, Seine et Oise for the 1st S graders club. I joined other bands mostly local West Yorkshire area. lst- Phil Fame and the Deacons, The Four Sabres, Green Tamourine, Denny and The Witchdoctors a show band. While with the Witchdoctors we met up with Heinz and The Wild Boys we were the support group, during a talk back stage Heinz said he was not happy with current drummer, so I said joking I will play for you and he, to my surprise said give me your details and I will be in touch. I thought nothing would happen but I got a shock when I was invited to join the band for rehearsals in a north London pub. I went down and joined the band and was out on the road the next week. I shared a flat with Brian Woods the bass player

we are still friends to this day. We all met at the flat and we kept the equipment there as well. That was our base really, being 284 Holloway Road we were handy for the studio for recordings. The times we had together were great, Heinz was a great friend to us all and we had some laughs together. Heinz was also up for practical jokes, he had been fishing one time and he used the van, when he came to pick us up we all said the van stank, Heinz was laughing and we found that he had in fact caught a 4 foot Tope and hidden it under the bench seat and it was high to say the least. we ended up tying it to the back step of the van and Heinz drove off towing this thing down Harrow Road. Well you know the result, it started to fall apart, not a pretty sight, we ended up telling Heinz to pull in, he did into a filling station, we quickly untied the thing and drove off. Never found out the result of that escapade.

I eventually gave my notice and came home on compassionate grounds. I did however get Heinz at our front door asking me to do a tour of Scotland with them as they were stuck, so I went and came home after the tour and went into industry as a pipefitter in which I retired from. During the 70’s I joined a band in Bradford called Reddy Teddy 60’s Rock and Roll, a great outfit to play with. After I finished in 1978 I decided that enough was enough and stuck with my job until as I said earlier I went into retirement.

I sincerely hope that you enjoy the disc and also the brief history of my journey.

The Order of the Photos with a little background information.

2 Larking about in our local pub

7 Jamie Lee and the Atlantics

8 Doncaster back stage with Jimmy Crawford

21 Brian and Barry rehearsing at Gainsborough

36 Heinz and family members, Mum Heinz, his wife Della and his sister, also Brian and Paddy our Roadie

39-55 are a look into the programme pages ofThe Tour

66, The Saints who were Heinz backing group

74 Barry James and The Strangers Showband

75 Adze Cuttler and The Worzels

76 Alec Winstone and the Flintstones

77,78 The Master Himself the Great Joe Meek. A Legend of The Music World

80 Cyril Davies and The Rhythm and Blues Allstars

85 The Great Carlo Little another legend

86 The Savages on stage at Morecambe Floral Hall

87 The Yeadon Town Hall near Leeds

94 Les Ford and the Counterbeats a Doncaster Band

99 Terry Sexton and The Shakes from Bradford

101 Jerry Lee Lewis in the white mac on board M.S.Daffodil destination was the Olympia Paris, most of the artists on the boat were going there. We were going to play at the NATO base

105 Neil with girl fans outside Sofia Gardens, Cardiff where the tour was appearing

106 Comfort a Halifax based band