On 1st April 2006, 40 years after the band first formed,
the original members got together for a reunion gig at
the Park View in Cleckheaton 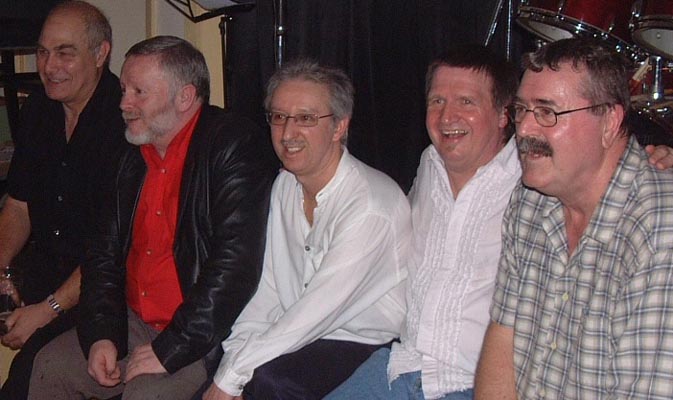 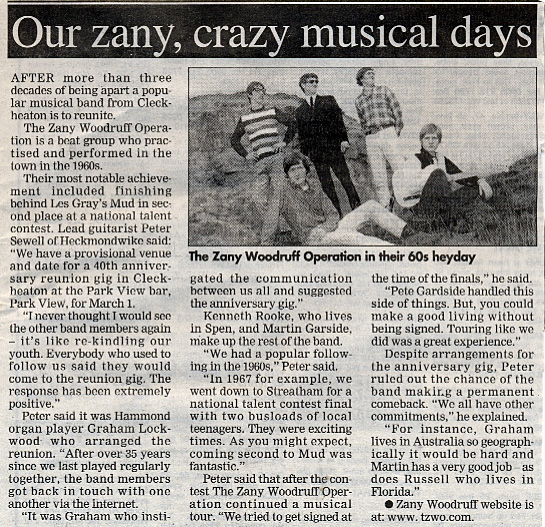 As you can see from the Spenborough Guardian newspaper from February 2006, any media coverage is better than none – even though they got the date & John Garside’s name wrong!

View the Gallery for pictures of the event

When Graham Lockwood first contacted me in 2005, asking me how I felt about playing a reunion concert, my immediate response was…”yes! I’ll make one in”…(it’ll never come off).
The original group had disbanded in 1967, and the last time I’d seen Graham had been in Birmingham, just before Christmas in 1978. By coincidence, we’d both turned up working in Mecca venues just around the corner from each other in the city-centre. I went off to work in Spain and later heard that he’d gone to live in Australia. Russell the sax-player left the band to join the RAF and was now living in Florida. The last I’d heard of Gaz the drummer, he had a bar in Portugal, and the only one out of the old band that I’d seen recently was Kenny the bass-player. He’d put his guitar away years before and was giving a resounding “NO!” to the idea of playing a concert. This was not an auspicious start!

However, through the internet the band-members were contacted one-by-one, and the reunion became more of a possibility. Through the applications of a large amount of alcohol and an even larger amount of wheedling by me, Kenny agreed to dust off his bass and the concert was on.

A song-list and dates were arranged, and Kenny organised a venue which couldn’t really have proved better. The people at the Park View Bar were brilliant, allowing us to use the room to rehearse…(which, after 40 years was a priority!) and they could not have been more friendly and helpful. The venue was also right in the middle of our old fan-base, Cleckheaton.

Gaz had turned up living in County Durham, and he and Kenny organized a PA system and equipment for Graham, so everything was in place for..the night!

John Garside, the band’s old manager, came to introduce the show and the music was mostly drawn from the soul-based repertoire of the old days, but it showed a definite jazzy tinge that wasn’t there in the 1960s. We got a chance for three rehearsals in the week before the concert, and the intros and endings (and some of the in-between bits) were different each time…and they were different again on the night, but we could put that down to spontaneity…(please?) Still the band fitted back together well. The vocal features were split between Graham and Kenny, with Gaz on backing-vocals, and there was a sax feature from Russ. Numbers like Van Morrison’s Moondance and Santana’s Black-Magic Woman were mixed in with the old soul classics like Midnight Hour.

To say that the concert was a success is somehow to miss what really happened… imagine around 300 people who hadn’t seen each other in 30 years, all back together again in the same room…people who were really close friends back in the days, yet who’d lost touch with each other for one reason or another. The concert couldn’t really have failed in such an atmosphere. Pete, an old friend of the band, was working in Pakistan when he heard about the gig, and he flew home especially. Irish Mick who now has a family in Aberdeen and travels all over the world in the oil-business came down for the concert. My old mate Pete Bradley, whose web-site was a big help in making the concert a reality, and who I last saw when we were both playing in The Band-Whose-Name-Must-Not-Be-Mentioned, travelled up especially from Nottingham, and similarly, scores of people travelled from all over the country just to be there.

Later on after the concert, Graham played piano for an impromptu choir that aired some of the old drinking-songs from our youth…(from the nights in The Royal when we weren’t all too drunk to sing!), and I saw at least one person crying…(although this might have been due to the quality of my singing rather than to nostalgia!)

The night was just overwhelming…(at least to me)… so many old friends were there that it just wasn’t possible to spend enough time with any of them. I never even thought that I’d see the other band-members again, yet here we were playing together. Back in the 1960s, these people were like family to me. We were young and invincible and just about living in a Ford Thames van (before Transits), travelling the country from one booking to the next…(sigh…the heady wine of youth!)

This event should be cited as an answer to all the detractors of the internet…without the web and sites like Pete’s and Graham’s the reunion could not have taken place. We were able to contact each other again, and despite being scattered all over the world, we could talk and arrange the event. About 300 lives are richer for the experience.

I would whole-heartedly recommend to any other bands who read this that they do the same thing. The experience was so rewarding and, as mid-life crises go, it’s not so self-destructive or expensive as a lot I’ve tried. I’m now back in touch with so many old friends that I’d just given up on the idea of ever seeing again.

So, any old bands who read this: trace your old mates, hire a venue and let your old fans know…the playing bit just seems to take care of itself!